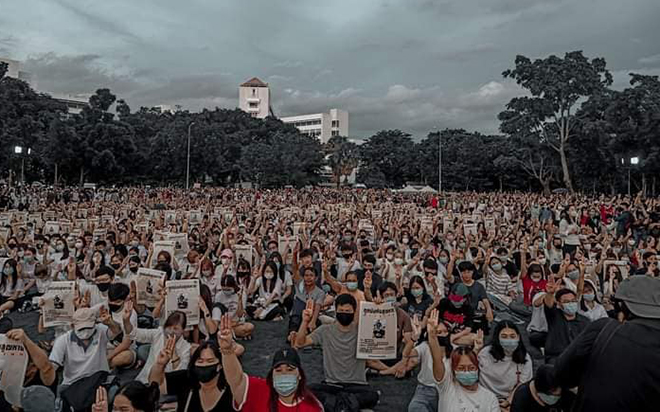 On 7 August 2020, the police with arrest warrants have arrested Lawyer Anon Nampa and Phanuphong Jadnok and it appears more arrest warrants have been issued against several other pro-democracy activists. According to the warrants, both face eight charges including raising unrest and disaffection amongst the people in a manner likely to cause disturbance in the country (Penal Code’s Section 116), ten persons upwards being assembled together do or threaten to do an act of violence, or do anything to cause a breach of the peace (Penal Code’s Section 215), obstructing the public way (Penal Code’s Section 385), a violation of the Emergency Decree’s Regulation which prohibits public assembly, an offence against the Disease Control Act, obstructing the traffic (Land Traffic Act’s Section 114), the use of an amplifier without permission under Section 4 of the Controlling Public Advertisement by Sound Amplifier Act and an offence against Section 19 of the Maintenance of the Cleanliness and Orderliness Act. The issuance of arrest warrant and the arrest have been made as a result of the holding of public demonstration by Free Youth at the Democracy Monument on Ratchadamnoen Rd., Bangkok on 18 July 2020.
As a legal organization working to uphold and promote human rights and the right in judicial process in Thailand, Human Rights Lawyers Association (HRLA) has found the Free Youth’s public demonstrations and expression together with their three demands including (1) dissolution of parliament, (2) stop harassing people, and (3) amend the Constitution have been organized unarmed and peacefully. It is an exercise of the right to freedom of expression, freedom of opinion and the right to unarmed and peaceful protest which are upheld by the Constitution of the Kingdom of Thailand 2017’s Sections 34 and 44 and the International Covenant on Civil and Political Rights (ICCPR) to which Thailand is a state party and it is incumbent on Thailand to uphold the treaty. That the state by the police have pressed serious criminal charges against pro-democracy activists is tantamount to the weaponization of laws and judicial process to silence and harass dissenters and is a brazen attack on human rights.
In addition, even though an offence against the Penal Code’s Section 116 is punishable by more than three years which could be cited as a reason to issue an arrest warrant right away, without having to issue summons, but given that both Lawyer Anon Nampa and Phanuphong Jadnok, another activist slapped with the arrest warrant do not appear to have a flight risk and have publicly known and accessible residence, it is not necessary to issue the arrest warrants straight away. In previous instances of the actions taken against those accused of violating Section 116, the police have opted for summoning the persons first. Also, the demonstration that triggers the legal action has taken place more than three weeks and meanwhile, the police have not made known to them about these impending charges. Now, in haste, they have applied for the arrest warrants and promptly made the arrest and brought the accused to appear in the Court right away. Such rash actions tend to show something usual has happened and how the authority quickly proceed with the case without respecting and upholding the rights in judicial process and human dignity of the alleged offenders. After all, they have just exercised their rights and freedoms upheld by the Constitution.
Human Rights Lawyers Association (HRLA) therefore calls on the government and agencies involved with the judicial process as follows;
1. The government should express their genuine respect on human rights and human dignity and must uphold the exercise of the right to freedom of expression and freedom of opinion as well as the right to unarmed and peaceful protest of all groups of the people. Such judicial harassment against the public, particularly dissenters, must be put to rest.
2. The police should immediately stop making the arrest and pressing charges against all pro-democracy activists who could be charged as a result of their involvement with the public demonstration organized by Free Youth on 18 July 2020. Agencies involved with the judicial process should strive to uphold legal rights of alleged offenders including their right to bail and freedom in order that they can exercise their right to defend themselves, without imposing requirements against the exercise of rights and freedoms upheld by the Constitution.